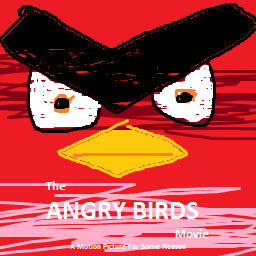 For whatever reason we’re in the universe where they consider an Angry Birds movie to be a marketable option and are fully going through with it. Of course it’s the same universe where Foodfight exists. I was fiddling through Google Play and I saw the listing of tracks on the album. And I have questions. Questions that can only be answered by yelling at music. The 2007 list is almost finished but I have to do this now. It’s gonna be after the read more divider thing, of course. Because I’m nice. I guess.

So, just a few things, there’s 14 tracks listed on Google Play’s page for the album, the last three are just like original songs or something so I’m not gonna go over those (I checked them briefly and, yeah, I don’t think they belong outside of the movie), but most of it is just licensed. I’m focusing on the licensed tracks and trying to figure out what purpose they’ll serve in the movie. It’s also kinda gonna be like one of those things where I try to figure out what the movie will be from the previews only, I guess. But mainly just observing the songs.
Okay, so, long story short, while there’s some good stuff, the rest seems like HEY WE NEED TO MAKE A MOVIE SOUNDTRACK WHAT IS THAT OH JUST PUT SONGS THERE AND IT HAS TO BE FOR KIDS TOO. Also like three original songs. There might be more in the movie but they’re not on this album. And I’m not seeing this movie. We got Zootopia. That’s apparently good. I still need to go see that. That will be the movie I see with animals in it this year probably. Unless I wait too long and the DVD takes until next year then I guess no movies. Yes I still use DVDs because my PS3 is the only thing that plays Blu-Ray but honestly I might just watch it on there anyway if I have to rent it because I might as well use the good big monitor. Though renting Blu-Ray is a little more expensive. Anyway if you want to go see movies, see good ones. If this one somehow turns out good and not just like “decent” or “passable” but actually pretty good, I’ll find some way to eat an edible hat if I can find where you get those.