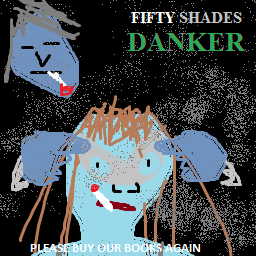 Why am I reviewing this? Because I wanted to review a soundtrack from a movie I don't plan to see. And what better than them trying to keep this whole WOW HE IS WHIPPING HER BUTT WHILE THEY SIGN CONTRACTS thing rolling, I guess.


And the other two tracks are just soundtrack things. Yay. We did it. It's a soundtrack to a movie I don't watch. I heard reviews of it that said the lead actress was playing her part kinda sarcastically which made it better. I would guess. Also why did they start releasing a bunch of old movies in generic 50-shades-esque covers, that just makes them look worse and like bootlegs. Even if there's vaguely sex in them and it's not like hardcore punching butt action.