Weezer Sings THE HITS! Order now and get a second copy of the album FREE! Just pay Shipping and Handling and MSRP and Sales Tax and Bribe Money. 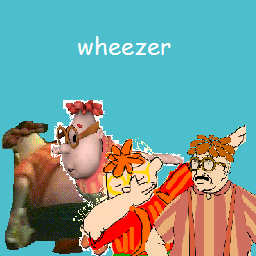 Well Weezer is still around and making albums apparently. And this one's all covers. For some reason they just decided to make a while bunch of those. Enough to fill a whole album, apparently. I'm going to look at this not-quite-blue-not-quite-green album.

So long story short this album is okay I suppose, and generally sounds like Weezer attempting to sound like other bands half the time and themselves the rest of the time. When I think covers, I think putting more of a spin on the songs, and less duplicating. This isn't one of those bootleg albums that sells for 99 cents on iTunes and acts like it's "just like the real thing with soundalike artists". It's also not some kind of parody. As a dedicated cover album, would have been cooler to really Weezer it up. Out of these the most Weezered would be Africa.