There's a new Pokémon game, and this time that means new Pokémon, and I feel like I should review the designs of Generation 8, just happening to finish this right before I've borrowed a copy of Sword to see if there's any fuss to fuss about. Regardless of how that goes, if I can still like one thing about the series, I'll go with the monsters themselves, even if all the games from the one before this one on leave a bunch out. To try to give the designs a fair chance, I'll have to see them in motion given the whole everything using models thing with the tendency for "default" resting poses, plus if I get to find any official 2D art I'll factor that as well. Of course, since this counts as spoilers for Pokémon Sword and Shield, anyone wanting to avoid those should probably get to a point where they know about all the new monsters on their own accord before continuing to read.

I'm going to rank these on a scale of 1-5, higher being better.
5: Love it, new favorite to add to the many
4: Like it, nice design which appeals to me
3: Fine, middle of the road, not great or bad but just average
2: Dislike it, doesn't sit well for some reason but not the worst either
1: Loathe it, just don't make me catch one unless I'm dead set on completing a Dex
I'm also not going to look at Gigantamax forms at this time, but I'll take a look at regional forms. Shouldn't bear repeating but the following is my opinion at the moment and it can change.

First as usual would be the starters, and as always it's Grass, Fire, and Water, in that order.

Grookey: 3/5
It's a monkey. This monkey is Grass and has a stick for drumming. Cute as a starter, but I haven't typically gone for monkey character designs.
Thwackey: 3/5
The way this taller Grookey looks, I thought it was a Shiny, but apparently not because there's an actual Shiny that's more different. This time the monkey is taller and has two sticks. That's mainly it.
Rillaboom: 3/5
A big hairy gorilla, with extra hair, that just has a tree drum thing now. Actually pretty cool design, but nothing I'd jump at. I just haven't been into the monkey designs much.
Scorbunny: 3/5
A cute bunny, but covered in bandages and involves a bunch of kicking to scare everyone into thinking it's going to become another Fire/Fighting. Still cute as a starter, but not a stand-out for me.
Raboot: 4/5
A bunny, still cute, now with some kinda mask hiding thing going on because I guess it's a ninja now. Or at least thinks it's one. And that's adorable. Probably the best out of the middle forms this time around, not just for the lack of "suddenly different palette" either.
Cinderace: 3/5
This looks like some kind of Chinese or bootleg or Chinese bootleg soccer mascot they attempted to submit to some kind of sports tournament thing. I don't hate the design but it could be better.
Sobble: 4/5
I've counted this one as what I'd pick if I played. I've called it Sadpole despite it being a lizard but it's a bobble-headed cute. I like chameleons, as well as lizards in general, and Kecleon being about the only chameleon up to this point, though a great one, has been resolved somewhat.
Drizzile: 3/5
A weird partial theme of having the middle evolution look like a Shiny when it's not just to confuse people. In the terms of awkward middle evolution, this checks all the marks, since it also is going through some kind of phase.
Inteleon: 3/5
This outright twig of a lizard is somehow a spy that points with a finger gun. Not bad, and I actually kinda like this design, but it's incredibly, and even worryingly, skinny, like its arms might fall off if you looked at it funny. Maybe it could use some milk to drink to at least strengthen the bones. I'm not even sure if it has bones or if it's kept upright by a series of some kind of bladders. Not that I'm saying it should be like the absolute unit of Blastoise or Swampert, but even Greninja wasn't this level of concerning slenderness. Unless this is just the "ideal image" perpetrated by the Pokédex photographers and actual average examples aren't so noodly.

Next, the regional rodent, bird, and bug, again as usual.

Skwovet: 3/5
It's a squirrel. Hello squirrel. Cute, but pretty much the rodent as usual and not sure it has the memetic power of Bidoof.
Greedent: 3/5
Chunky squirrel. Some say it looks like Peter Griffin. I more think it's one of those classic type designs from the days of 2D hand drawn animation being feature films. It's also just so happy.
Rookidee: 4/5
It's bird. Hello bird. Bird looks angry but that's just the pattern on its face. Like real birds. That's adorable.
Corvisquire: 3/5
The bird is enlarged and still looks angry but not. Edgier but not brooding.
Corviknight: 4/5
Say hello to Skarmory 2, now carrying entire cars because that's just a normal and not scary thought in the Pokémon world. A nice giant bird that would probably love being pet and scratched like pet birds might like. Just watch the fingers. Or entire limbs.
Blipbug: 2/5
Why is this bug's face stretched out? Is it looking over in one direction or maybe that's supposed to be some kinda cartoon shiny effect? I mean Bugbus in last gen did look a bit like it was looking over for whatever reason too, and I don't really have a problem with that aspect, but overall I like Bugbus. If they were going for the "egghead" look by shoving an egg into its head, that happened.
Dottler: 3/5
It's a Mario enemy made of triangles in a round format and also mustache whiskers. Almost like a crab without big claws. Kinda cute.
Orbeetle: 3/5
It's a weird floating ladybug type with its butt on its head. And it has weird jaws. Maybe it's supposed to be like aliens.

And now the rest, things that might be recurring roles but I don't really care to point them out aside from Legendaries.

I'm still not entirely sure what constitutes a "pseudo-Legendary" but they generally seem to come before the box Legendaries.

Dreepy: 4/5
A cute lizard... snake... ghost? I'm tempted to call it "droopy", but mostly it's a living dart pretty much. Hello, dart buddy.
Drakloak: 3/5
A slightly larger lizard snake ghost that has a little dart buddy along for the ride. So it's part typical evolution and part adding stuff.
Dragapult: 4/5
A big grumpy jet-faced lizard with missile launchers. But they hold tiny dart buddies. And that's just cute. The parent is going to hurl its kids at the enemy. Somehow that's become cute in this form, figure they would perform tiny lizard nibbles.

And now the Legendaries.

Zacian: 3/5
Dark Souls joke. Dog with a sword, pretty much. When it doesn't have the sword, it's made out of braids. Sort of a pastel blue and red for whatever reason.
Zamazenta: 3/5
Dog with a lion mane shield kinda thing going on. Sure. Without that, it's pretty much just red and blue wolf, in darker colors than its counterpart.
Eternatus: 3/5
Here's a complex angular segmented seahorse that's also some kind of Satan spawn incarnate. The design strongly implies "this is bad guy Pokémon", even more than Giratina. So why not catch it yourself and cause hell.

Finally, regional forms, and this time they're not all originally from Kanto.

Meowth: 3/5
A very strange fuzzy cat, but turns out that's just the beard. Meowth from other regions are clearly good at shaving.
Ponyta: 3/5
This horse is made of cotton candy. That's mainly it. Don't eat its tail off like in the preview videos though.
Rapidash: 2/5
Yep, just a unicorn. That's exactly it. Put this in some animated 80s movie with a questionable budget and it would fit right in. It's obnoxiously that.
Farfetch'd: 3/5
What if Farfetch'd had a bigger stick? That's this. Also slightly darker and edgier. It's like Shadow the Farfetch'd in contrast to the Sonic Farfetch'd of Kanto and anywhere else not Galar. It even drags its giant anime sword around for increased edge points.
Weezing: 3/5
This design works better in 2D given the whole "render smoke as some kind of smeared chunk thing" approach in the models. A weird design about old timey smokestack barons and such.
Mr. Mime: 2/5
This looks more like a mime than usual, while also being a balding clown. And is still creepy. Which is probably intended as before.
Corsola: 3/5
A sad skeleton ghost of a coral that reflects the folly of mankind and raises questions on if people should even be inhabiting Galar given their weird approach to anything, between taping fossils together and using the coal from monsters made of coal.
Zigzagoon: 4/5
A weird Kiss version of a raccoon that's not quite a raccoon and more of a weird dog. An interesting idea, though I think I would still more likely pick the spiky classic cute brown more raccoon dog.
Linoone: 4/5
An angry fast badger ferret that also came from Kiss. Not so outright and directly adorable as the regular fast badger ferret thing but still very cute.
Darumaka: 3/5
A cute snow runt. But it's not Snorunt specifically.
Darmanitan: 3/5
Weird sorta fiery but mostly icy snowperson monster thing. It switches between afro yeti and flaming snowthing with bright orange hands.
Yamask: 3/5
What if this sad ghost was more sad and instead of carrying its face, it had some weird fragment?
Stunfisk: 2/5
The weird pancake fish became a bear trap. Interesting take on it, I guess every region needs its oddly Poké Ball-like mimic. Still, I have mixed feelings of this one in general.

Now to break down where all of these designs fall and what percentages we have in each category for an overview. Just because I'm a statistics nerd at times and I'm also doing this for my own figuring out of myself. 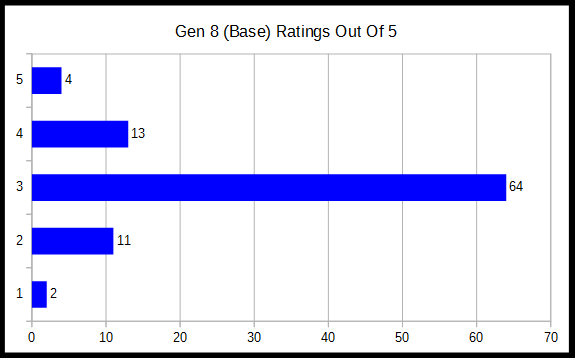 From this graph it's pretty apparent how I've decided most look "average" to me at the moment, and there's just a few more that I like or love compared to the ones I dislike or loathe. Things may change later on as more settle out of the "average" once I've sat on things as more monsters get added.

These are just the ratings for the base game when it released without any updates. There was an expand ass announced with new monsters and regional forms, plus there's going to be the Mythicals added, therefore I'll revisit this Generation later when all the new monsters are out there, adding and possibly shifting rankings as I feel by the point everything's out. I also plan to go back through the previous Generations and rank those for some context, which is probably easier since I've gotten to know those designs more.