On the continued backwards journey through Pokémon designs by generation, next is the first 3D generation, as in the main games on the handhelds were in full 3D and not sprites in a 2D environment, so there was a start of a disconnect between the art and how that translated to 3D, especially given that they really wanted to maintain an "anime" look for the "main" games. Also they made the models way too high-res for the system in an attempt to future-proof it. This covers the games from Pokémon X and Y to Omega Ruby and Alpha Sapphire, but the really high-res models continued into the next generation.

Like before, a scale of 1-5, where 1 is a loathed monster and 5 is a top favorite. I also won't be covering Mega forms at this time as I'm looking more at the "base" forms that don't require a special power, but some monsters just have a bunch of forms regardless.

As usual, we start with the starters.

Chespin: 4/5
A cute little chubby rodent sort of thing that marks the move away from reptiles for Grass starters. It's fuzzy and has a boopable nose and is adorable. I'm also not sure if it's wearing a hood or that's some kind of shell.
Quilladin: 3/5
Now it becomes a goofy oval with hair and even more encased in armor. Has an odd nose and an almost creepily over-enthusiastic smile but it's still cute.
Chesnaught: 4/5
A big fuzzy tough cute with a really big shell as well. It has a beard and chest hair and big arms to hug with, maybe. I would have chosen this starter if I wasn't set on picking Froakie.
Fennekin: 3/5
A fox with ear hair and a weird forehead and an overall head that looks a little too giant for its body but isn't exactly unusual either.
Braixen: 3/5
A fox with legs, somehow this one got into Pokkén but not its final form. Probably some weird popularity thing, maybe its skinny skirted legs had something to do with that. It also has a stick on its butt. Not in, on. Like in the tail though.
Delphox: 4/5
A tall fox with extreme ear hair, extreme arm hair, and extreme leg hair. It's very fluffy, and also like a dog you might want to pet. It carries an even bigger stick.
Froakie: 4/5
A cute nervous-looking frog with a bubble nose. A bubble nose that begs to be booped. It can also do a weird thing with its bubbles (which are specifically called Frubbles for some reason) to sort of hide its face but I don't see it being very effective. It can also do this weird thing with its eyes where it just looks chill but it didn't really close its eyes.
Frogadier: 3/5
The frog is lanky now, still with bubble nose, but now a bubble scarf and darker markings overall.
Greninja: 4/5
A cute weird tall frog. It's even lankier, but has defined thighs and chest, and has big ear things. Also a strange crotch piece. And of course, the tongue scarf. I think that's a bizarre and great idea because there's this cool ninja monster that almost always has its tongue hanging out in some way. And then when it manages to fit all that tongue back in its mouth somehow, it's just a silly looking frog. It can still do that weird eye thing too where it's just chill and happy. For some reason it can become another form that slightly resembles Ash from the anime because there was a weirdly strong bond there, and generally that's the same aside from the markings, growing hair, and having a giant Water Shuriken thing on its back. I think I prefer the base form more however.

Bunnelby: 3/5
It's a rabbit with dirty paw ears. Just imagine a rabbit with dirty paw ears. Ears that somehow allow it to dig.
Diggersby: 3/5
It looks like a gross opposite of Lopunny, generally here's a guy who works the junkyard and has an office full of whatever the equivalent of Playboys filled with Lopunny to pass the time. A filthy chunky rabbit by design alone, it's an interesting take on things.
Fletchling: 4/5
Tiny baby bird. It's a robin that goes peep. It's pretty much just that and it's cute.
Fletchinder: 4/5
Angry bigger robin. Definitely looks like a real bird.
Talonflame: 4/5
Take a peregrine falcon, make it spikier and orange, and call it good. This and its whole line are among the most bird-like of bird monsters in the series. I like birds. Also it's a toasty egg hatcher as a plus. Then it dominated the competitive scene for quite some time somehow.
Scatterbug: 3/5
A nerd worm. It's got a tooth and is generally a worm with hair.
Spewpa: 5/5
The fuzzy confetti baby bug. There's been an ongoing trend where the cocoon forms of bug monsters have been really good comparatively and aren't just a lump with eyes. This is a fuzzy cute lump with adorable eyes and attitude and is loaded with confetti. It will puff out and spread pixels throughout the whole room for a quick decoration that might be harmful if ingested.
Vivillon: 4/5
Number 666, clearly the most demonic of Pokémon. And it's a butterfly. It's cute. It has happy pixel eyes. However, this bug pretty much dominates the GTS when it has an opportunity given there's tons of forms that are dependent on the region a Scatterbug was created in. And a couple event-exclusive forms on top of that. So it has a lot of wing designs.

Now most of the rest.

Now the things that aren't Legendary, and aren't Sudowoodo, but they're somehow of some kind of status.

Goomy: 5/5
A cute blob with a weird face that's sort of a goofy smile. That's all this really needs to be and it does it wonderfully.
Sliggoo: 4/5
A goofy snail that has tiny nubby arms and somehow an even sillier face. Its eyes also got weird so it might just feel everything in its way with its nubby arms and antennae.
Goodra: 5/5
A big huggable dragon that's covered in goop because somehow those two things combine really well even though they shouldn't. Very pear-shaped and a goofy dragon overall, sort of reminiscent of Dragonite but more of a snail this time.

For some reason there's a few more after the pseudo-Legendary this time.

Klefki: 4/5
One of the most loathed monsters of this Generation and yet I like this one. "Object monsters" tend to get a bad run with people but they can be well done. This is a cute keyring with noodly arms to hang onto keys very tightly, whether or not they were given voluntarily. They actually made keyrings based on Klefki which sold out very quickly, so clearly some people like this monster.
Phantump: 3/5
A spooky cute stump that might just be some kid's spirit trapped in a log. This series has a lot of stories like those.
Trevenant: 3/5
A spooky tall tree ghost. Very spiky. Don't get stuck with a branch.
Pumpkaboo: 5/5
Fluffy pumpkin spirit with a cute bat face. And it's wearing pumpkin pants with flashlights. And it comes in many sizes, sometimes tiny, sometimes utterly massive. But all very fluffy and round and a great monster to have around fall seasons, or any season.
Gourgeist: 4/5
Marzipan from Homestar*Runner became a Pokémon that grew out of a pumpkin. That's all I can see from this. The same shape and everything pretty much.
Bergmite: 4/5
A cute tiny ice triangle spike. Tiny feets too.
Avalugg: 3/5
A big flat turtle with cracks all over it. It's an iceberg but a turtle.
Noibat: 4/5
A noisy bat, very squeaky. It has speakers for ears, as some monsters had way back in Generation 3, but this is smaller and fuzzier and I'm very sure cuter as well.
Noivern: 3/5
A dragon bat with speaker ears. Even noisier and larger and claw-ier.

Now the real Legendaries and Mythicals.

Xerneas: 3/5
A rainbow deer with a lot of antlers. It pretty much walks on stilts on tippy toes.
Yveltal: 3/5
A bird made of burnt bacon. It's a bit fluffy but also very angry.
Zygarde: 4/5
This one has four forms, first is the original hexagonal snake form. I like that one, and it would be at home with a group of Dunsparce, the underground snakes they are. Snakes and ground seem to be a recurring theme. Three more forms got introduced later on. The first of the new is the cell or core form, which is a cute baby snake, and I also like that one. The second is a dog, which doesn't really make sense, but then again there's a fish that becomes an octopus. That one's okay. The last of the new forms is some giant police mechazord thing? I'm not the most fan of that one, it seems really generic and should more be in one of those shows that becomes Power Rangers when it's translated.
Diancie: 4/5
The queen of the fluffy rock bunnies. Or princess. Some kind of royalty. A lot like its subjects but more defined in a humanoid-ish shape. Reminiscent of the later Tapu Lele.
Hoopa: 3/5
Hoopa has two forms, the first is a tiny thing that floats around, has rings that make holes, and eats donuts. That's cute. The second is some giant angry monster with a lot of arms and also hair. That's not so cute, but it's interesting.
Volcanion: 3/5
I feel like Volcanion's more notable status is being Fire/Water typing than being Mythical, because it seems to be mostly forgotten as far as I think, unless some competitive circles are focused on it. So naturally it's steam-based. Which means it has a giant ring on its back. It's generally monster-shaped.

It's time for statistics. How fun. 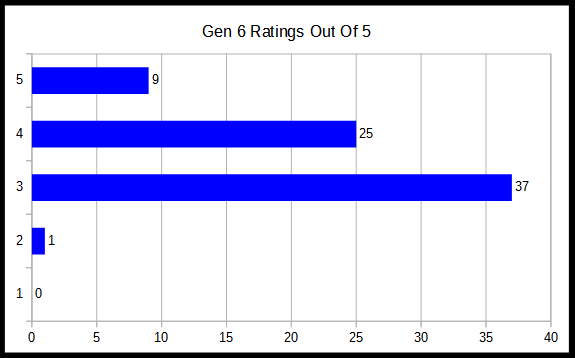 There are fewer mons this time around than most other generations, so the bars are a bit skewed, but it generally seems that I like a lot of this generation proportionally. Nothing to loathe here, lots to love with this one. Though the games did feel average looking back, the designs were pretty nice in my thoughts. And somewhat jiggly. Being able to pet monsters for the first time in a main game sure helped too. Also this generation introduced the Fairy type, which has become one of my favorite types, so a lot of monsters involve that.

Next up would be Generation 5, the last of the sprites, and it's a divisive one too (but what hasn't been lately in this series) so that could be fun.