Here we go, a divisive generation that's also being looked upon as being the best one in the wake of whatever Sword and Shield are doing, but people will also probably argue it's the worst. It even took me a bit to warm up to these designs. They took a sort of "re-inventive" angle to have exclusively new monsters initially for the games, so there's a lot of role re-filling as well. This is the last of the "sprite" games though, despite having many 3D features, the characters are generally sprites in these games, so there's some interesting stuff there to consider for how characteristics were shown. There's also a whole lot of monsters so this took a while to get to with everything else I was doing.

As before, the scale is from 1 to 5, with 1 being the most loathed and 5 being the top favorites.

This generation is a bit different, it starts with a Mythical. All because of some weird lore or promotion thing.

Victini: 3/5
It's a whistling V-demon with butt wings. It's all about victory and doing the finger V thing. Incredibly large blue eyes like dishes that stare past you. Just an odd promo monster representing something.

Snivy: 4/5
A smug snake lizard. Cute, yes. Lizard, yes. This one had to grow on me a bit but it was one of the first that did.
Servine: 3/5
Mostly a taller snake lizard that's becoming more snake. It's weird to see the idea of evolving involve losing limbs when it comes to a series about monsters becoming stronger by evolving.
Serperior: 4/5
A fancy snake. I do like snakes. And it's fairly cute. Also very fancy. Now pretty much without limbs, but can use vines or something like most Grass-type starters do. Also kinda resembles a banana in a peel.
Tepig: 4/5
What a cute piggy. It's so happy and snorty with its piggy nose. This one seemed to take the longest to grow on me, but worth it. I find I enjoy piggies.
Pignite: 4/5
For being the 5 billionth Fire/Fighting type, this one's all right, and I might even say this middle evolution outshines the prior two middles. It's a buff yet plump strong piggy, still with the big pig nose, and even fangs. It also kinda looks like it's in a wrestling singlet or some kinda suspender pants.
Emboar: 3/5
The 500th monster overall in the typical index, now pretty much a big bulky fighter, with a fiery beard that's also shoulder pads somehow. Complete with a belly band with swirls and what looks like wrestling pants, another mon that's oddly clothed-looking. Very grumpy and piggy.
Oshawott: 4/5
How cute. An otter baby. This one appealed to me first of the three for just being so cute. Complete with a shell accessory in representation of how real-life otters tend to have food on their belly while swimming on their back.
Dewott: 3/5
A bit of an odd one, it mainly has hairy pants and now two shells. It's also much bluer.
Samurott: 4/5
A cute doggy otter with a mustache and a giant shell horn hat. It also has two swords it stores in its arms somehow, where its forelegs from it suddenly being quadruped can still be used as arms. It also looks a bit chubby from its musculature and might be fun to ride on if it can run at a decent clip while carrying someone.

Again, this generation being a bit different, it doesn't follow the whole rodent/bird/bug pattern like others do, so here's just a bunch of monsters. Including many bugs.

The pseudo-Legendaries, and then even more bugs immediately after.

Deino: 3/5
A silly small dinosaur dragon with hair on its face. It also looks happy to just be.
Zweilous: 3/5
It's grumpier with two heads, still as hairy as ever. Looks like it could bite anything in its way that it can't really see but is sure is there.
Hydreigon: 4/5
It's a cute angry demon dragon with two puppet hands. I could see this doing puppet shows or getting into arguments with itself. That's just fun for an ultra-tough demon dragon.
Larvesta: 4/5
Small cute fluffy warm bug. Tiny nubs and a fluffy face and just eyes there. It also has weird funny tube horns all over it that can apprently blow fire everywhere.
Volcarona: 4/5
Toasty moth. Moths are fun and fluffy. This one's extra warm. It too has tiny nubs, but a big butt. I also feel the need to pet its round head.

Finally the real Legendaries and Mythicals.

Cobalion: 3/5
A fluffy blue antelope that almost looks like it has a mustache. Part one of this trio of Legendaries, which is a thing that keeps coming up in this generation.
Terrakion: 3/5
A chunky bull that almost looks constipated. Clearly the brawn of the group, compared to whatever the others are. I guess fancy. This one looks like it could hold up in a fight and not be all stuck up about it.
Virizion: 3/5
Can you hear me now? Whatever cellphone this monster's tied to, it probably has nothing to do with Telefang. It's a sleek green sorta-deer-looking thing.
Tornadus: 2/5
The first of the genie trio, which I wasn't exactly a fan of to begin with, and each has an alternate form. This one can go between angry cloud man and weird chicken. It's also very green and kinda purple.
Thundurus: 2/5
Another weird-looking genie or weather god or whatever type. This blue thing goes from angry cloud man to... I'm not exactly sure, I guess it's like a dragon? Bootleg Lugia? Whatever it is, it has a tail that's shaped like something that's not exactly meant for a kid-accessible game.
Reshiram: 3/5
I find Reshiram okay. I don't exactly love it but it's a fluffy dragon so it's nice enough. Also it has a feathery protrusion from its crotch which can be taken in all the wrong ways. Also it has a jet engine tail ass thing.
Zekrom: 3/5
I wasn't exactly sold on the cover legendaries for this generation, but this one's also fine. It's jet black, rubbery instead of feathery, and also has a jet ass that's also more like a drill.
Landorus: 2/5
One of those weird genies got separated from the others for some reason. It has two forms, sitting in a cloud person form and weird faced tiger form. It's very orange.
Kyurem: 4/5
Kyurem is an interesting ice chicken dragon. On its own, it's a neat and slightly chunky dragon that looks a bit grumpy. However it can DNA Digivolve with the two cover Legendaries and become a weird fusion that also gets a more generic angry dragon face. I feel like Kyurem acts better on its own in this case, but an interesting merging concept anyway.
Keldeo: 3/5
It's a horse. This horse somehow ties with the other quadruped Legendaries that all end in -ion. It has two forms, and the alternate form is slightly different, mainly the horn gets bigger and a couple other changes, but nothing really massive to consider.
Meloette: 3/5
This is a singing and dancing lady-shaped mon that has the whole musical note motif attached to it hard and fast. One form has green flowing hair, the other has some kind of orange tornado hair thing going on that wouldn't look out of place anytime between the 1950s and 1980s. It's also a lot like Kirlia.
Genesect: 5/5
This is a bug and a robot, so that's already two cool things. And it might even be part fossil. It's also somehow very cute with its constant smile. For a bug likely named for an atrocity and also having a giant gun strapped to it, it's a great Mythical and monster overall. It can also turn into a car or maybe it's a surfboard of some kind. Still with that smile. 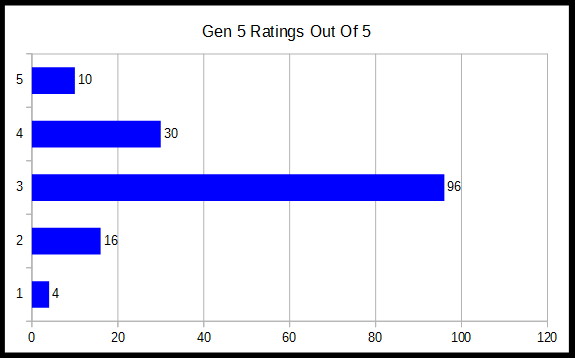 As far as this generation being divisive, it really just means that I have more showing up in likes and dislikes it seems. This seems to have the most monsters yet showing up on both sides of the big average, but this also has the most monsters in a generation as well, yet it's not just proportional either. Still, many of my major favorites come from this set anyway, so I guess it's fitting a number falls into the least favorites ever.
After all this stuff, as long as it took going over so many monsters, next I'll be going back further to Generation 4, still in the sorta-3D-but-still-sprites area. And probably slower gameplay. Just be careful when you're using super tank walls in battles, maybe bring a book if someone manages to hit a super effective.