Back when Game Boy wasn't advanced and Nintendo only went up to 64, the Pokémon series was finding its footholds in doing whatever it does. A lot of marketing, for one thing. This was when I really started getting into the whole thing, after making a poor attempt at the initial generation and finding more fun in Snap and Stadium minigames than the mainline stuff, I actually got further into Gold than I did Yellow. However I'm not just going to go off nostalgia for ranking the designs of Johto Pokémon, I'm just looking at the designs. Save all the nostalgia stuff for the eternally-marketed Kanto mons next time.

Once again, these will be ranked from 1 as the lowest to 5 as the highest score.

We start with the starters, as we usually start.

Chikorita: 3/5
It's a pear. Somehow this pear dinosaur baby isn't liked by a lot of people but I find it fine.
Bayleef: 3/5
A leafy dinosaur. It happens a lot in this series. This one has yellowed a bit and has a big leaf stuck on its head a bit like one of those anime hairstyles with the bit coming off, the ahoge. I guess it could be a bit of a goof, being a big strange dinosaur.
Meganium: 4/5
Big flower dinosaur. It's cute, yes. Also pretty tall, as it is a dinosaur. It also has antennae for some reason, sure. I guess it's meant to be like the usual flower genitals or whatever those parts are, but they just look like funny bug antennae.
Cyndaquil: 5/5
Cyndaquil is too cute. It's a happy squinting hedgehog that's tiny and fiery. Definitely something to hold in the hand.
Quilava: 5/5
Fire ferret. It's a ferret or weasel or something and it has fire. It's adorable and a bit longer than before, but not quite a full wriggly tube.
Typhlosion: 5/5
A big tall fire badger. Well, relatively tall at least. Still big, though, it's got quite a wide shape to it. That and its fluffiness along with its warmth really make this mon incredibly huggable. Perfect for a starter in that way.
Totodile: 3/5
Tiny gator. It's cute and bitey. It seems like it would flail around and bite on random furniture and be difficult to remove from it.
Croconaw: 3/5
Some sort of chunkier cave croc here. It really seems like the teenage punk phase here.
Feraligatr: 4/5
A tall gator that had to have the o removed since names could only be 10 characters long in the translated versions. Still about as chunky as the previous form, but taller. Somehow one of the back sprites makes it look like it's got serious booty though, but (un)fortunately it's just some weird back shape business that got cropped weirdly.

Now some common birds and bugs and whatever small animals.

Sentret: 4/5
For common rodent monsters, this one is up there. It has a tiny cute face and a big round yet flat body with arm flaps, and it seems to stand on its tail a lot due to its stubby legs.
Furret: 5/5
This ferret is essentially simplified to what a ferret can be considered. A wriggly fur tube. It doesn't even have a nose, it just has an adorable face stuck on the round end. I love this fur tube. Looks extremely soft.
Hoothoot: 3/5
Owl orb before that other owl orb. Still a fun round bird that somehow looks like it has two legs merged into one, and it has two of those when it takes out the other one. Birds are weird like that.
Noctowl: 3/5
A more owl-looking owl. Not an orb, more owl-shaped with angry eyebrows.
Ledyba: 3/5
A cute ladybug that's a bit punchy-looking. Also has big cartoony eyes.
Ledian: 3/5
Still cute, but more bug-like and even a little alien-looking. It's even more punchy with its cartoon boxing glove arms, but the eyes are less cartoony now.
Spinarak: 3/5
Tiny squeaky spider. Well, for real-world standards it's a giant spider, but it's tiny for the series. It also has a happy face on its butt. Apparently its butt face can change expression, like to being sad or even angry. Don't make it angry.
Ariados: 3/5
A bigger spider who has had two legs become weird butt antennae. It still has a butt face, but different, because the hole on its butt, which is somehow not a butthole and instead shoots web, acts as the mouth for the eye spots.

Here's a bunch of other monsters for most of the rest of the list.

Finally, Legendaries and pseudo-Legendaries together, including a Mythical.

Raikou: 3/5
I don't know if these are supposed to be cats, dogs, or lion dogs. I think they eventually just settled on "beasts". This one sort of looks like a tiger and has funny big cheeks.
Entei: 3/5
This one is big and brown and has a star smacked onto its face. Also kind of a big mustache.
Suicune: 3/5
This one somehow got its own game in the expanded version of the originals. It has a big crystal shape in its giant horn thing. Also whips. Also very blue.
Larvitar: 3/5
A small and stumpy dino baby. It is what it is. Cute enough.
Pupitar: 3/5
The only way we got a basic cocoon monster this time is somehow in the pseudo-Legendary line, since the common bugs only have two forms each this time. It's hopefully over soon enough. Not the worst cocoon I've seen, though, just very basic.
Tyranitar: 4/5
This tall green monster and Typhlosion share a bit of the same face, but this one's interesting enough as it is. The only problem comes when some lines try to become this one instead of doing their own thing.
Lugia: 5/5
Calling this a whale of a bird is accurate. It's large like a whale and bird-shaped. It's also a bit plump by design, which makes sense for something that lives in the ocean and is large. Just like whales. It looks ferocious yet cuddly, angry eye thingies and a plump body with giant wing hands to hug with. It combines cool with cute pretty effectively. Definitely the reason why I went for SoulSilver after having played Gold prior.
Ho-Oh: 3/5
It's a funny sorta-rainbow chicken. Counterpart to Lugia, it's also a funny bird. It's more based around a phoenix, but a funny one. Maybe more relation to whatever weird bird Dyna Blade is.
Celebi: 3/5
It's the onion fairy Pokémon. Somehow it's involved in time travel. Mainly it's green and onion-like, but pink if Shiny. Until next time, see ya. 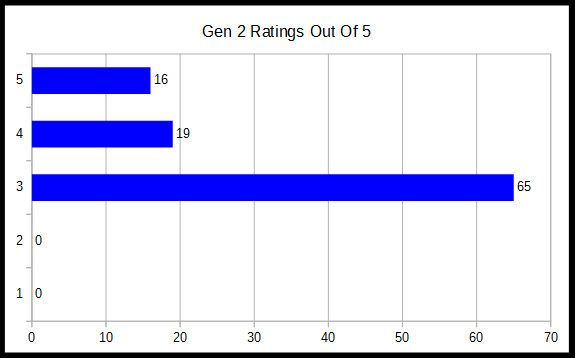 Of course most are in the average, because I guess that's how averages work, or maybe it's more of a mode technically, but it's very leaning toward things I like. That part I expected, I do like a lot of mons from this generation. They're still a mix of strong and cute overall, but not quite the slightly "reboot" feeling starting with the next generation, when the reference art got more clean-looking and starter mons got gradually larger heads.

Next up is the generation that practically everyone who even barely knows about Pokémon knows about, the original set, which will be eternally marketed with Pikachu and Charizard leading the charge as long as Game Freak somehow knows how to make games, or the same marketing tactics stick around for the rest of the games.