P25TARATS (Pokémon 25: The Album Review, And Then Some) 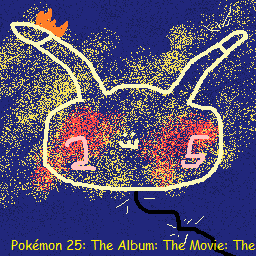 For the mega billion dollar franchise Pokémon, apparently the highest-grossing franchise ever according to people who also like to point out all the issues with the mainline games, they went and decided to put together a whole album to celebrate the 25th anniversary year, bringing in all kinds of modern star talent with those billions, or some fraction of it at least. For all I know it took less to make the album than it does for one of those charity singles where a million celebrities each sing a word, and that's just one song. Meanwhile the biggest thing I probably did was buy a used copy of New Pokémon Snap. Yay. At least that game is a nice update to a classic, even though I can't exactly send monsters flying into volcanoes by hurling apples and pesticide orbs into faces in that one, all for the sake of funnier photos. But at least there's music streaming, like there's nearly everything else streaming, including video games, but those can be harder to stream. With the main album finally out, I feel like I'm overdue to yell at a music collection that's not a top rank playlist, and one that bleeds into another main interest of mine as well. I'll be looking at every song that came out for this promotion, all neatly compiled in some order on the main album, specifically the digital version since I guess CDs supposedly don't hold much anymore even if songs are getting shorter. Also it's easier to stream audio than try to set up some kind of teleporter. Or wait for shipping. I can wait for physical discs I'm actually after.

This last set of remixes came out as an EP, prior to the album itself. In true series fashion, they had one "red" EP with the original songs and a second "blue" EP that has the remixes, sold separately. Of course the music industry already does that anyway. All of these remixes are from one remixer.

This album turned out to be one full of music ranging from barely even related to Pokémon to name-dropping them practically every other line. Given the range of tying in, it seems more like they were given the prompt as a suggestion along with the requirement to not swear a whole bunch, instead of being told "hey write a song about Pokémon and we'll pay you". There are a bunch of songs about Pokémon out there anyway, sometimes really specific ones under really specific conditions, and they didn't just do a compilation of those. To me, there hasn't exactly been a stand-out hit from the list, if any of these songs end up getting radio play. If somehow it did happen, I'd guess either Katy Perry's or Post Malone's given their respective popularity and such and not being overtly related to Pokémon to where it'd feel like an advertisement, like J Balvin screaming like a Pikachu. Anyway this has been a review I'd been planning for the better part of the year, more just being on the back burner until the album actually released in full, and with that out of the way we'll see if I do that year end review later on. Or any other album reviews in general, if I can pick out any albums to review.