Here are the Sims I've had in the Sims 3 game. In my case, the game has the majority of expansion packs, no stuff packs, and a select few mods.

A cyborg robot lizard, ROBOT LIZARD (LIZARD for short) appeared in town and sought to take over with an army of robots. However, building just one robot would take a lot of time and money, so he signed up for a bill-paying job. First he tried a generic business career, but that ended quickly due to a breakfast fire. Eventually he landed in journalism, which ended up taking up a lot of his time, while also writing the occasional book on the side. Despite all of the other business, he still managed to build ROBOT ROBOT, and eventually upgraded her to her highest potential. He even gave her a plot of land to use as a museum for her paintings after accumulating vast wealth.

LIZARD has been known to go out on whatever dates he's asked, but the dates usually end up being talking outside of a random building before someone gets distracted, and that's even if the other person shows up. He'll go out on the town on occasion, and sometimes visit the future to make sure everything didn't go horribly wrong, but he could also always take over the future as well. He's even cheated the lottery by checking the future. Even so, he's been known to rummage through trash in search of parts and other useful items. As he's a celebrity, which makes sense due to him being a news anchor, he gets all sorts of stalkers and paparazzi trying to bring down his name, though he generally doesn't care. 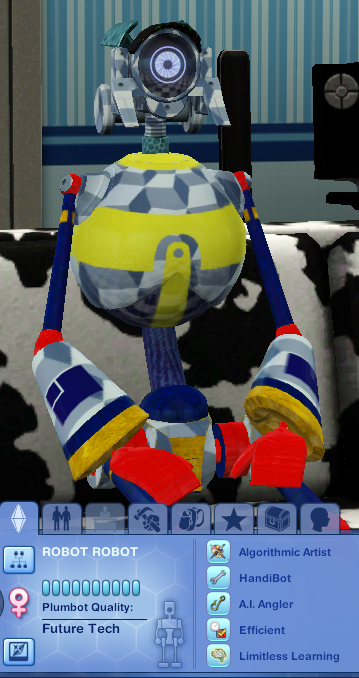 A Plumbot created by LIZARD, ROBOT ROBOT (just ROBOT for short) was at first a cleaning and fishing robot, but eventually was upgraded to have an artistic talent, and soon after, sentience. She fishes and paints in her spare time, and acts as more of a free spirit without any specific job in mind. She may take over the initial goal of taking over the town with robots that LIZARD once had, once she starts building her own Plumbots. She acts like a caretaker for LIZARD, though he generally takes care of himself, she more just cleans.

ROBOT has at times thrown the odd house party while LIZARD is out at work, but this doesn't seem to faze him. She has a collection of trinkets and toys won from crane games, among other things, and has even been abducted by aliens, prompting her to write a bizarrely-written book about the experience.

(Back to main Sims page)