Here are the Sims I've had in the Sims 4 game. My experience with the game is largely with mods on the base game since that was given away free at one point. We'll see if I ever get any expansions, particularly the one with robots. Note that Aspirations may vary from any shown due to how the system works, instead I list "ambitions" as the general Sim's behavior focus. 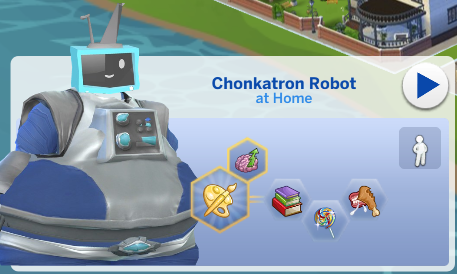 Chonkatron's main goal was to be an expert at nearly anything while becoming an incredibly large robot. This power of doing just about anything gave him a lot of powers, including not needing sleep. He became an expert in many fields and leads a career in eSports. He has also managed to set up a relationship with Liberty Lee, but has yet to commit in marriage. If he does so, he may offer to somehow turn her into a robot. In his spare time, when not gaming or dating, he's a rocket scientist that explores space. That's just on top of his desire to become skilled in every skill he can think of, except for anything athletic or related to being a jerk. He's also a skilled gardener and writer (of apps and books) for extra cash, and definitely knows how to cook well.

Tanky's goals are causing trouble and getting rich, so being a habitual thief is his main pastime. He can steal things many times larger than himself, somehow, and has been gradually cleaning out the neighborhood. He still makes somewhat legitimate money with a part-time job at a store and his dragon fruit farm sourced from an initially stolen one from said store. While remarkably rounded, he still has some effort toward being somewhat fit, and is showing off his body as much as possible. He has set up a cheating relationship with Nancy Landgraab, but is leaving it as cheating at her house instead of convincing her to divorce her husband as it seems more fun to do. On a date out with her, he somehow ended up lost in Chonkatron's town, so he paid him a visit looking for a way back. The two aren't exactly friends but don't dislike each other either. 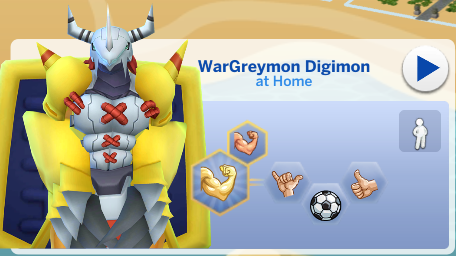 Simply put, WarGreymon wants to become the most swole Digimon in town, despite effectively being the only one. He also aims to set up a massive home gym if he can accumulate enough money for it. He aims to be a nice guy and sticks up for good, yet is somehow good friends with the troublemaker Tanky, even mentoring him at the gym at times. He's even spotted Chonkatron at the gym, possibly looking for the bar next door. Regarding said bar, as well as the gym, both have undergone odd changes since WarGreymon's arrival. The gym is now clothing optional and has a grill in the back, and the bar has a strange communal bathroom setup. Any relation of these events to WarGreymon himself is a question in itself.

(Back to main Sims page)